I was fortunate enough to have a business trip for 9 days to Punta Arenas – Chile. While I was there as a engineer I had time during my visit to get my camera out on a few occasions . So this blog is about my photography exploits in a fairly limited amount of time and gear.

I travelled very light on this trip with photography equipment. My Sony A7Riii ,one lens the 24- 105 G F4. My Lee filters Graduated and 10 stop and 15 stop. That and my Tripod only.

I arrived in Punta Arenas for there 3 days of summer temperatures of 24C which for this area is highly uncommon. arose early on the first day to get some sunrise images on the Harbour wall. 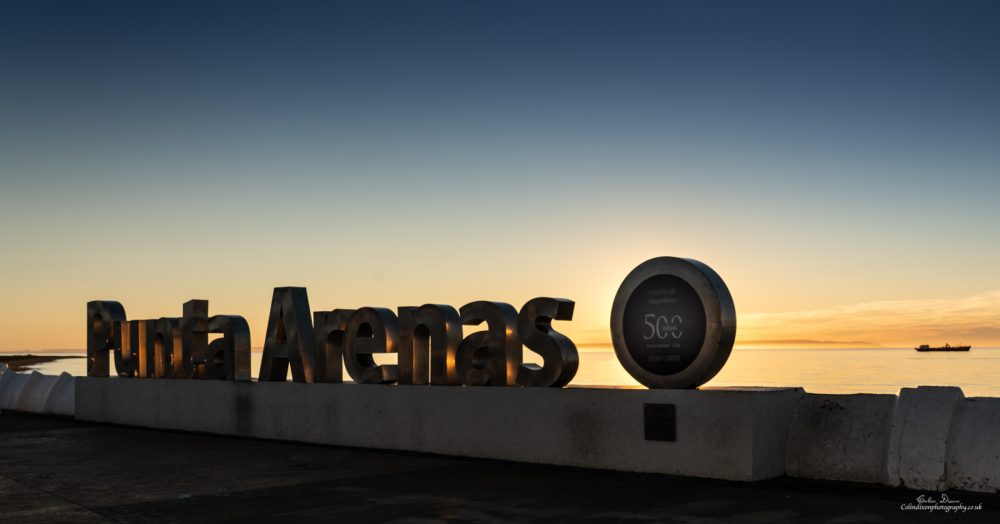 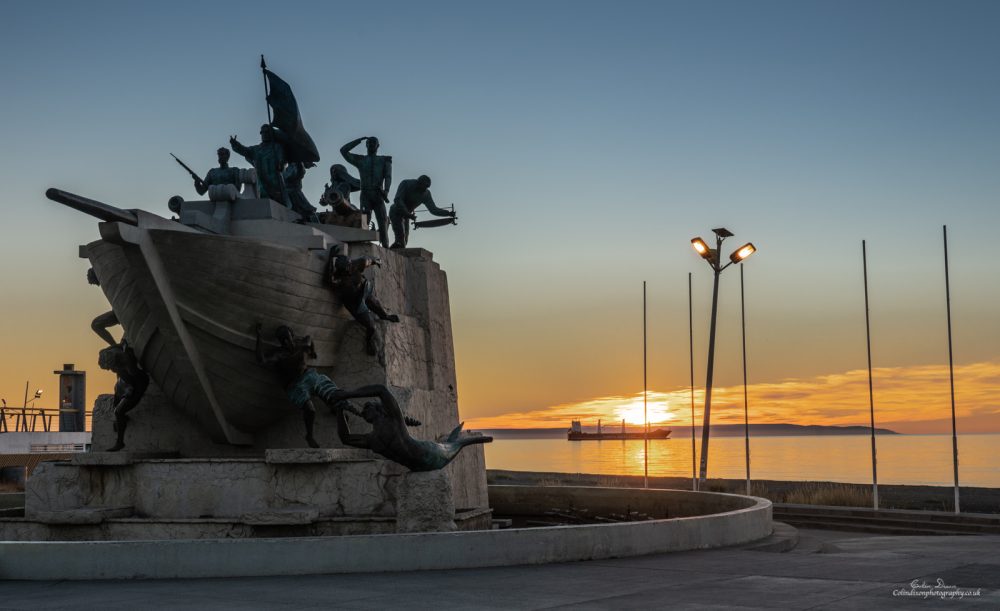 Taken at 1/160s F8 @ISO 320 shows the great dynamic range of the Sony a single image. Goleta Ancud – Schooner Ancud on the Waterfront 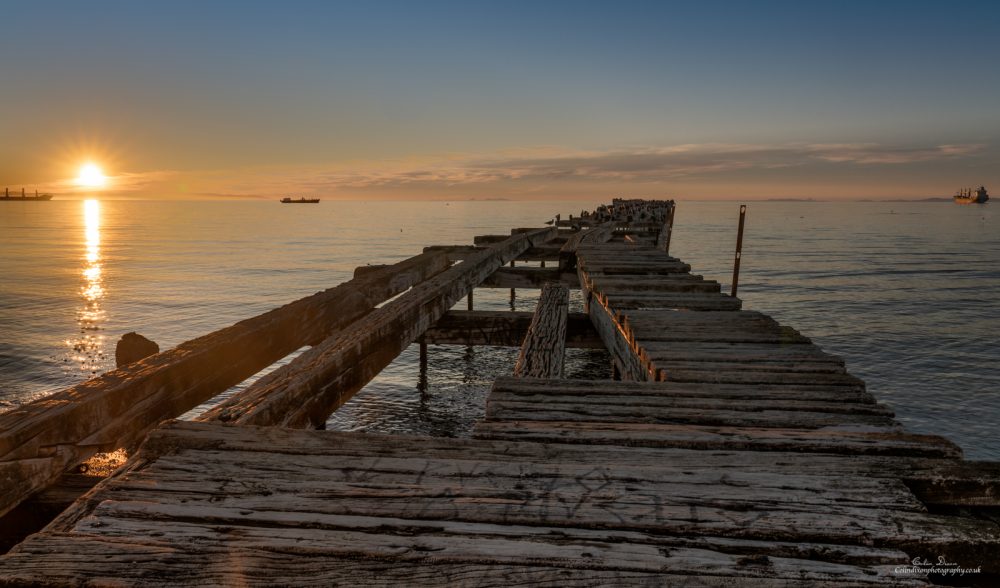 This is a 3 picture bracket image blended manually in Photoshop.One of the piers of what at one time must have been a huge busy shipping place. 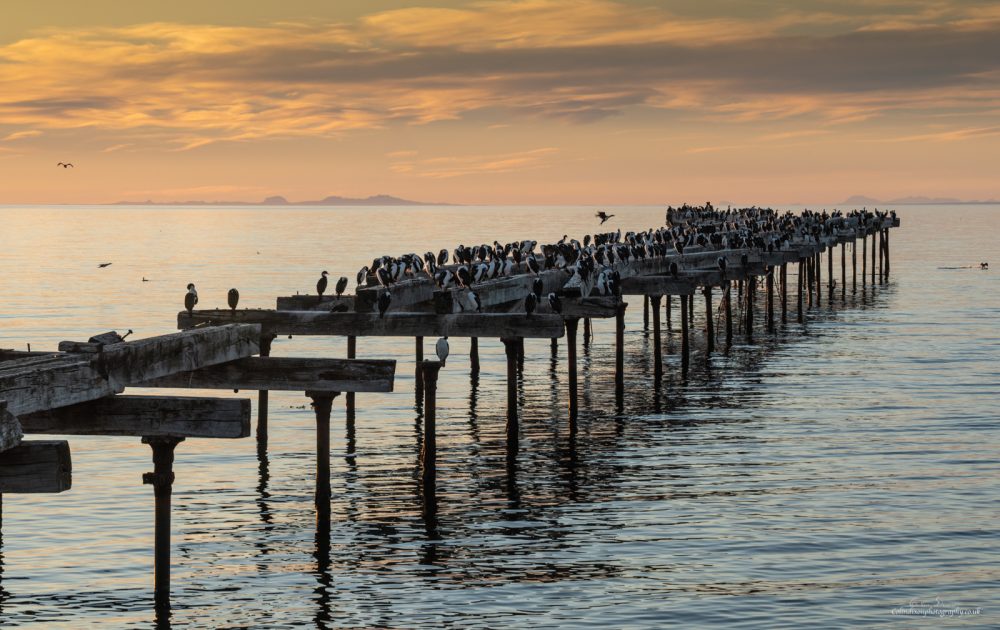 At the weekend before my return on the Saturday took the opportunity to visit the shipwrecks on the coast a pleasant 3K walk along the sea front. The weather now the normal summer about 12C and windy. 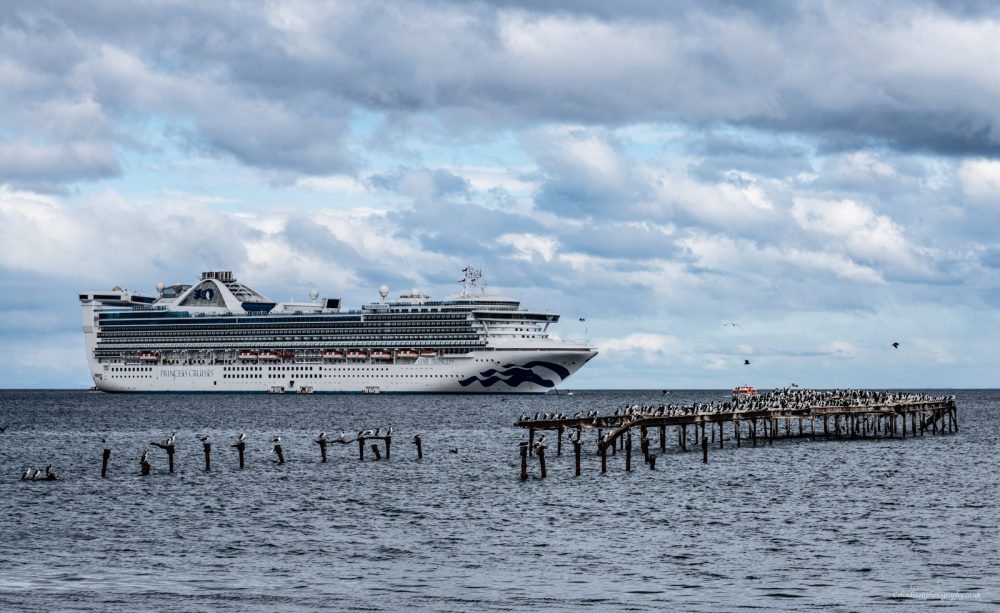 Here a cruise ship is approaching the harbour (Not the harbour in the picture of course). 1/320S F9 ISO 100. 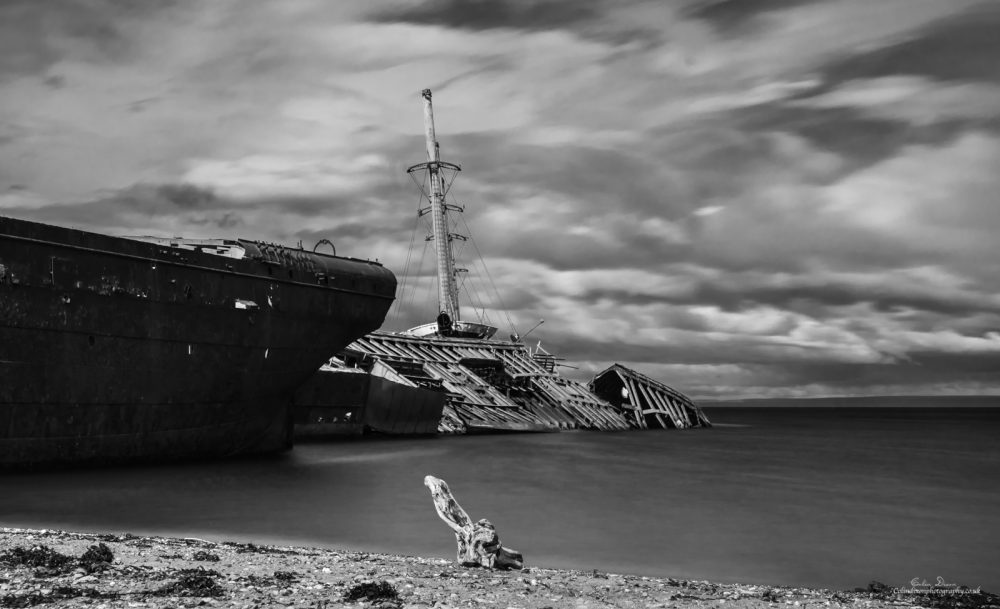 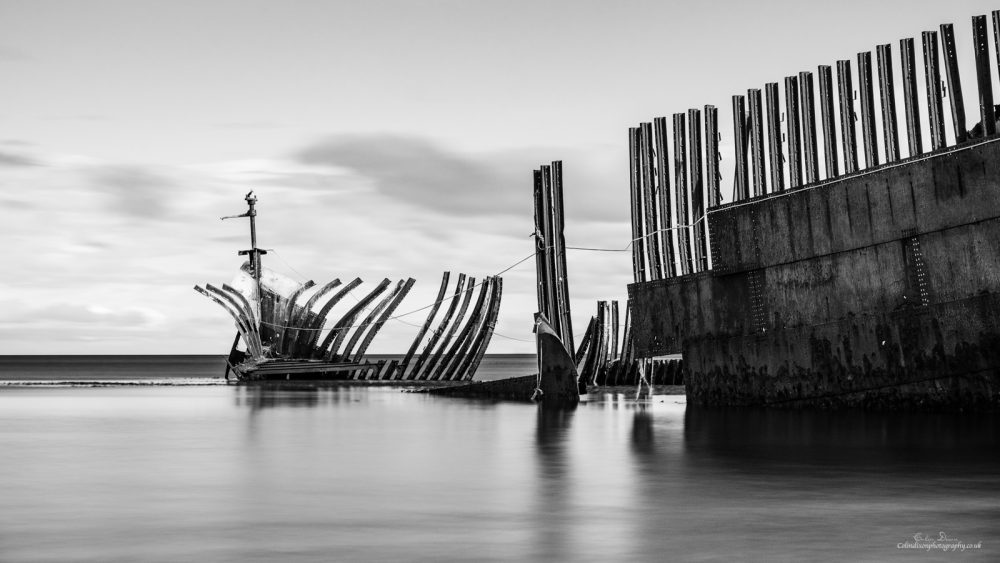 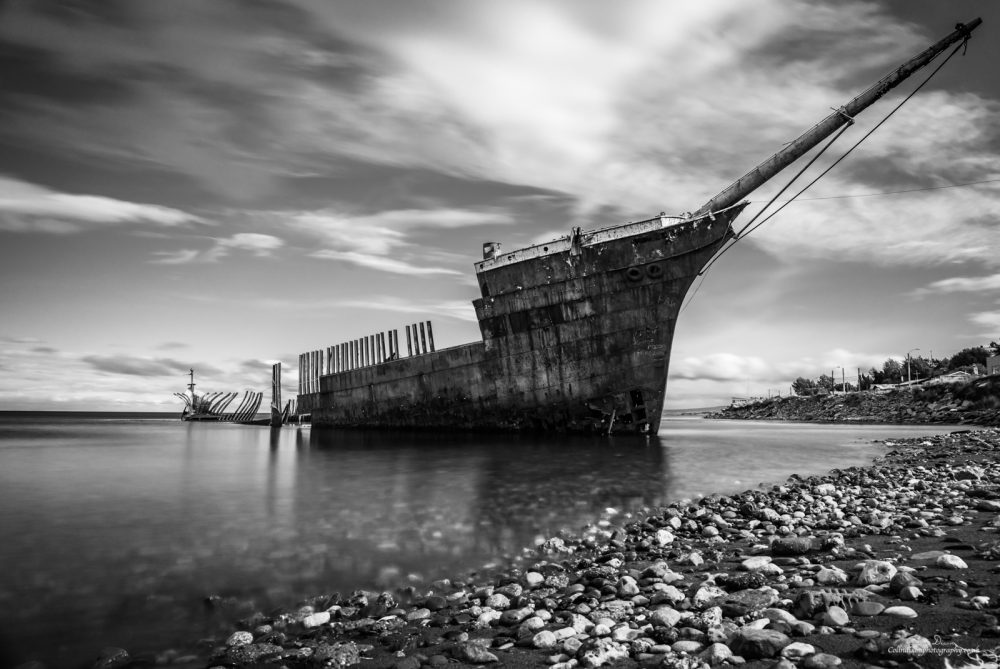 Two images of the Lord Lonsdale the real reason for my walk. Again a long exposures with the 15 stop filter. The same setting of the shot previously.  A little bit of the history I found on the internet.

Lord Lonsdale started its final journey in Germany in 1909 set to sail all the way to Mazatlán, Mexico. With the Panama Canal still under construction, that meant a trip through the Strait of Magellan. While stopped over in Stanley Harbor in the Falkland Islands, the ship caught fire. With the blaze out of control they did the only thing they could – they sank the ship 560 miles away from Punta Arenas. So how and why did she end up here? The steel hulk was sold to a company of traders who had plans to convert it into a storage facility after move it to Puerto Natales, a feat requiring hundreds of miles of towing through the straits – but it only made it to Punta Arenas before they literally abandoned ship.

On the Sunday I had a spare day before my flight back to the UK. I had to take the chance to visit Torre del Paine National park. A long day on two buses in total 18 hours but well worth it have to return to do the place justice next time. This was a race as a typical tour with most stops 10 minutes so a great test of photography. Most the people with there iPhones out must have thought who is this mad man. But think even though the light was against me got some reasonable images. 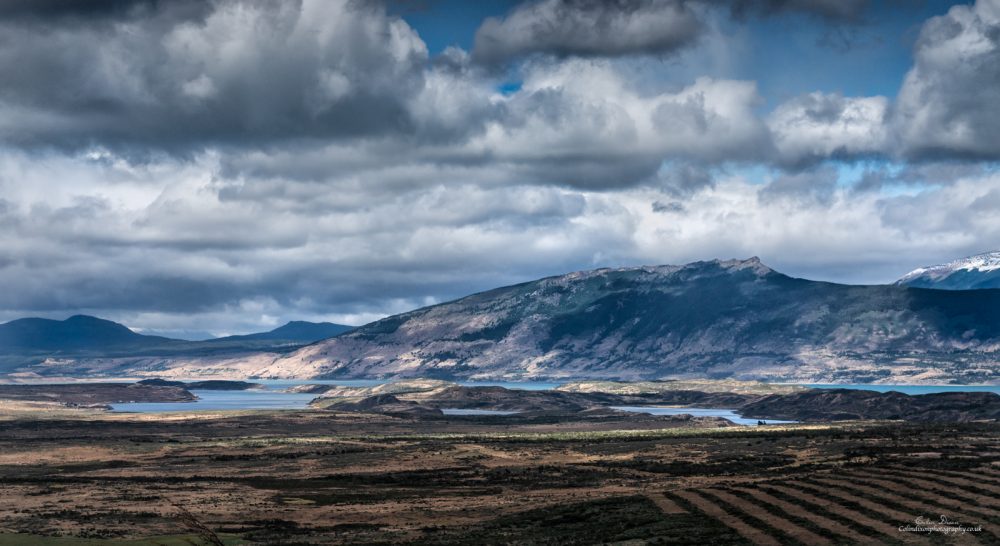 The images above are after a bit of a climb one of our longer stops. This is just outside the National park. Fabulous views . Used a Neutral Graduated filter to balance the sun and of course a tripod. 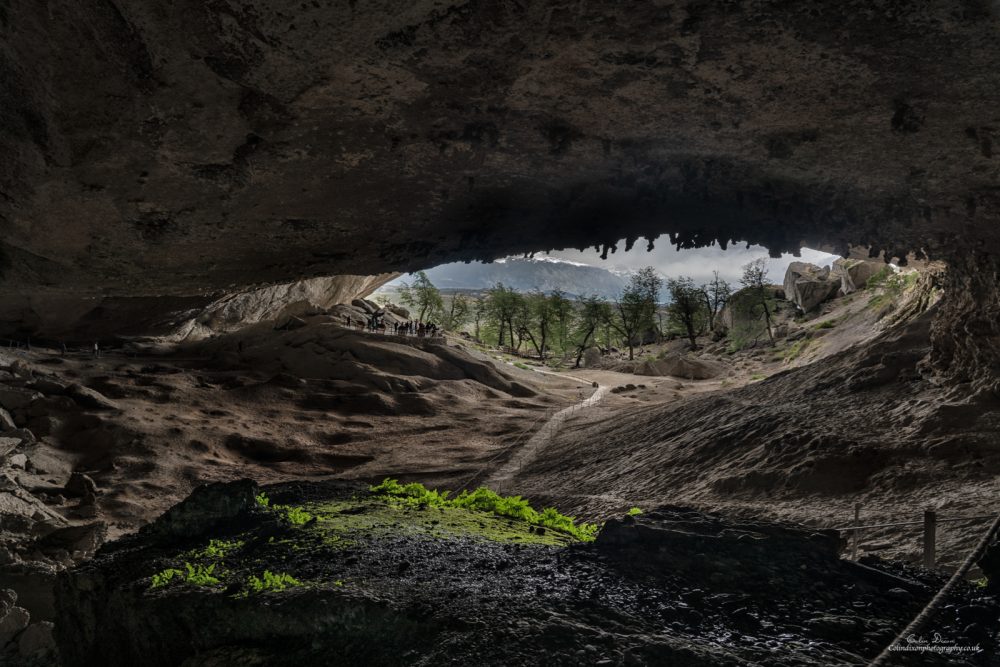 This is the cave below my feet in the previous two images. This of course is a 2 image shot blended with luminosity masks for the outside and inside. 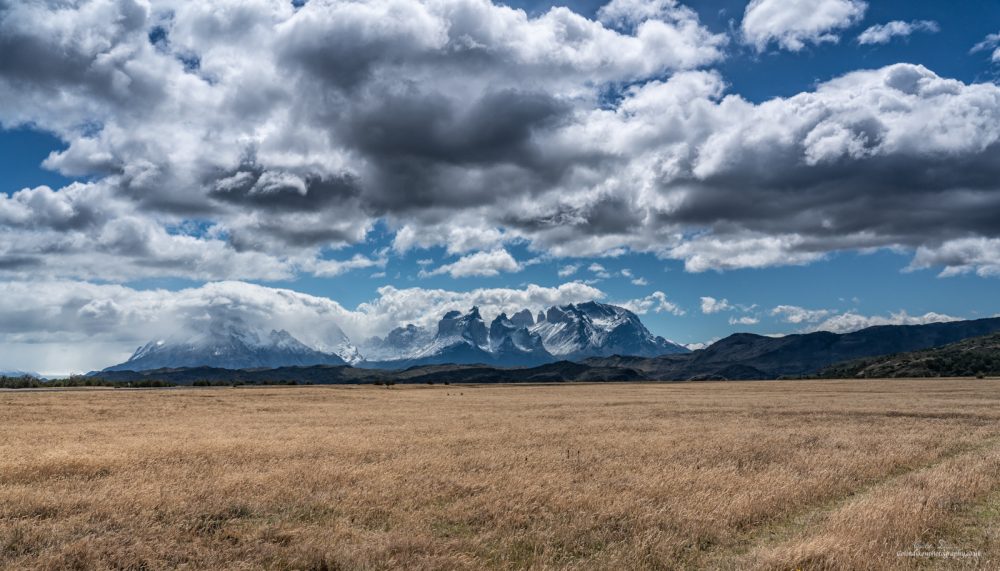 This image is at the entrance to the park with the Cerro Paine Granda peaks in the distance. The Term “Paine” is from the Native language meaning Blue so the Blue Mountains. 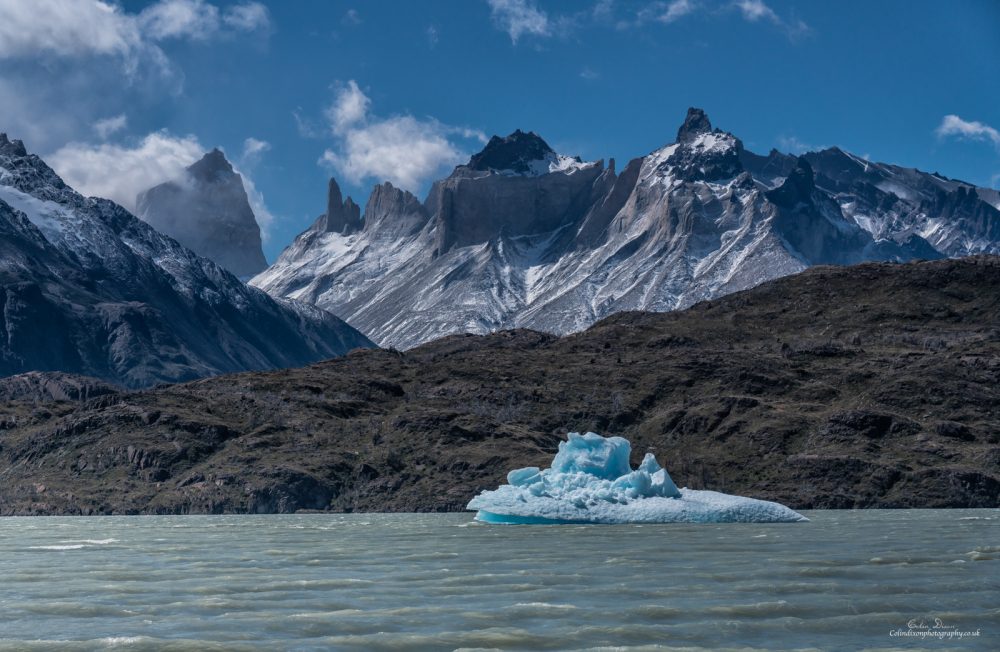 The two images above are at Grey lake (Due to the water colour from the Deposits from the Grey Glazier) The new ice from the Glazier and the Mountains behind was amazing. Again would love to come back to take the boat to the Glazier wall.

The top image is a panorama both images had to be hand held as the wind was almost blowing me of my feet. So used the ISO @ 400 to give a shutter speed of 1/2000 sec to stop and movement issues. The Panorama was created in Lightroom. 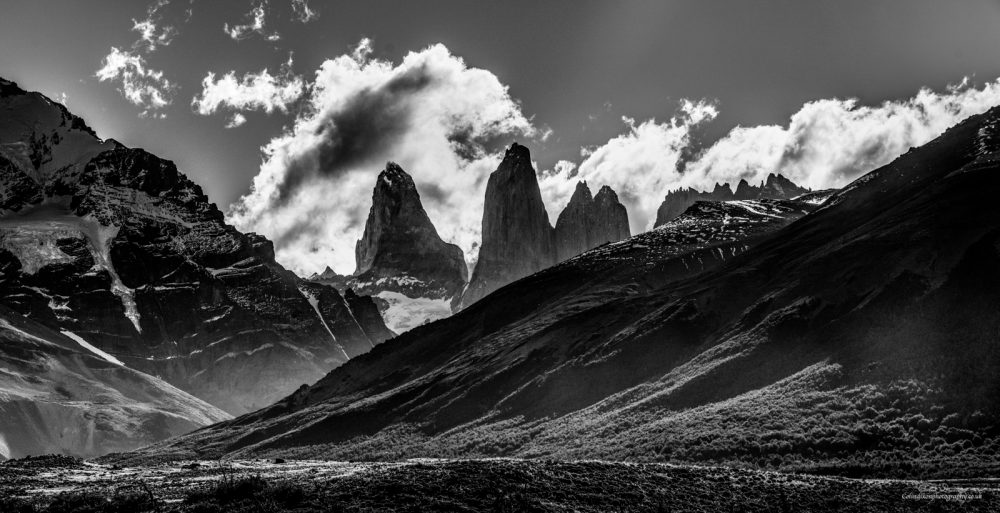 The reason I will for sure return was the disappointment of getting to see the Torre del Paine three peaks with the sun right in the worst place so with a lot of editing got a image of them but not my best. But I will be back as some one famously stated 🙂 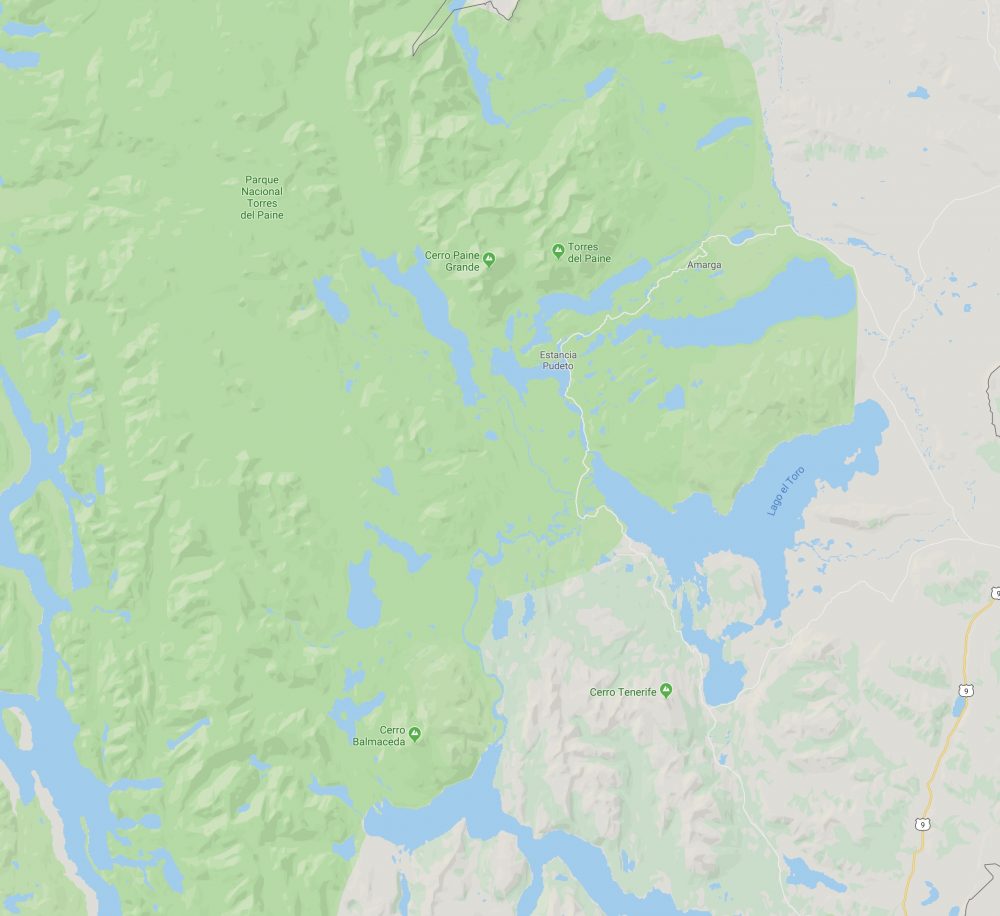 Hope you enjoyed my photos and come back for more blogs.